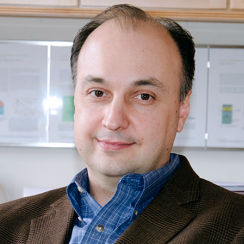 Vladimir Bulović is a Professor of Electrical Engineering at MIT holding the Fariborz Maseeh Chair in Emerging Technology. He directs the Organic and Nanostructured Electronics Laboratory, co-leads the MIT-Eni Solar Frontiers Center, leads the Tata GridEdge program, and is the Founding Director of MIT.nano, MIT's new 20,000 m2 nano-fabrication, nano-characterization, and prototyping facility that opened in the summer of 2018. He is an author of over 250 research articles (cited over 45,000 times, and recognized as the top 1% of the most highly cited in 2018 in the Web of Science) and an inventor of over 100 U.S. patents in areas of light emitting diodes, lasers, photovoltaics, photodetectors, chemical sensors, programmable memories, and micro-electro machines, majority of which have been licensed and utilized by both start-up and multinational companies.

The three start-up companies Bulović and his students co-founded jointly employ over 450 people, and include Ubiquitous Energy, Inc., developing nanostructured solar technologies; Kateeva, Inc., focused on development of printed electronics; and QD Vision, Inc. (acquired in 2016) that produced quantum dot optoelectronic components.  Bulović was the first Associate Dean for Innovation of the School of Engineering and the Inaugural co-Director of MIT’s Innovation Initiative, which he co-led from 2013 to 2018. For his passion for teaching Bulović has been recognized with the MacVicar Fellowship, MIT’s highest teaching honor.  He completed his Electrical Engineering B.S.E. and Ph.D. degrees at Princeton University.