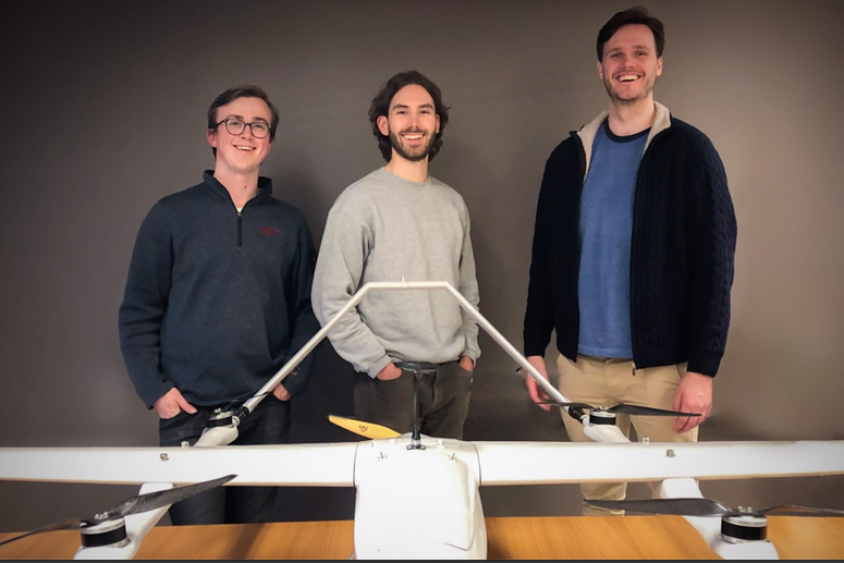 Lars Erik Matsson Fagernæs, Bernhard Paus Græsdal, and Herman Øie Kolden (l-r) met in Cambridge, Massachusetts, during orientation for an MIT Professional Education program in 2019. In 2020, in response to the Covid-19 pandemic, they teamed up to improve medical supply chains in their home country of Norway and throughout Scandinavia.

The onset of the Covid-19 pandemic spurred an immediate need to develop new, innovative systems in supply chains and infrastructure. And for three Norwegian graduate students enrolled in the MIT Professional Education Advanced Study Program (ASP), spring 2020 was the moment when technology, innovation, and preparation met opportunity.

Lars Erik Matsson Fagernæs, Bernhard Paus Græsdal, and Herman Øie Kolden were all students at the Norwegian University of Science and Technology (NTNU) but only met after they arrived on the MIT campus for their ASP in 2019. Fagernæs came to MIT to study computer science, Græsdal focused on robotics, and Kolden came to study plasma physics, though he had prior experience with drones through a job at a defense contractor.

When the pandemic began in early 2020, Fagernæs, Græsdal, and Kolden were all still in Cambridge, Massachusetts. NTNU would eventually recall them home, but not for a few months. To pass the time, they read news from Norway and identified a problem that they thought they could solve.

Norway is not an easy country to traverse, with roads laid out circuitously around mountains and fjords. Small regional hospitals do not have easy access to the labs and testing facilities at larger university hospitals. “Some local governments don't even test for Covid during weekends because they have issues with transportation,” says Fagernæs. “In some parts in the north, you have to drive for 10 or 15 hours just to transport tests to the hospital for analysis.”

The friends had already been working on a drone-related project and pivoted to the idea of making a drone to transport biological samples. They chose a fixed-wing quadcopter design that combines vertical takeoff and landing with efficient long-distance travel.

Their prototype drones were built at MIT and tested in the Johnson Athletic Center around its running track. They found inspiration in the work of MIT professors like Russ Tedrake, director of the Center for Robotics at the Computer Science and Artificial Intelligence Laboratory (CSAIL) and a professor of electrical engineering and computer science.

“Bernhard and Lars took my graduate robotics class,” Tedrake says. “They were extremely engaged and regularly asked questions that made it clear they were not just listening to the lectures, but were actively experimenting with the ideas. My role was to introduce them to topics in dynamics, control, and optimization, and talk them through the projects, but the innovation and hard work was all theirs!”

In building their drone, Fagernæs, Græsdal, and Kolden had to overcome a number of technical issues, including icing, vibrations, and variable temperatures. Evolving EU drone regulations necessitated building redundant systems and a parachute in case of malfunction. However, the biggest challenge was the distance they needed to fly, 120 kilometers from start to end. An autonomous flight of that length had never been completed in Scandinavia before.

“People thought we were crazy,” Fagernæs recalls. “But we were lucky enough to speak to the right people at the hospital who were desperate for a solution, and they decided to give us a chance. So, we have been working ever since, day and night.”

This past March, the students achieved a proof-of-concept flight, making a 120-kilometer flight in just 80 minutes, cutting hours off ground transport times — all with minimal piloting. They believe this is the longest autonomous drone flight in Scandinavia, strong evidence to support the viability of a much-needed service that will extend far beyond the Covid era.

“The drone has both internal and external sensors, which give you information about the world. Then based on that information, it's able to navigate and fly autonomously,” says Græsdal.

Given the number of sensors and automation built into the aircraft, a single pilot could conceivably back up 10 or more drones.

“Because of the current state of regulations, nobody in the world operates fully autonomous drones. It’s definitely coming, though,” Kolden adds. “We have what’s called a ‘back-backseat pilot’ so if there’s a warning then you can take control.”

In order to develop their technology further, Fagernæs, Græsdal, and Kolden have also launched a startup, Aviant. Publicity from their test flight has already led to interest from their Scandinavian neighbors. “We are now expanding into Sweden,” reports Fagernæs. “We are doing two projects in Sweden, helping with all sorts of logistics with drones, because [transportation infrastructure] is a huge problem in Sweden as well.”
The trio is effusive about their MIT experience. “We’re starting a company, changing Norwegian infrastructure — this never would have happened without MIT,” Græsdal says.